Dorset Council provides community services based on the principles of quality, equity, value and responsiveness.

Looking for something specific? Try a search.

The Dorset Australia Day Awards are presented annually and recognise outstanding individuals/groups that make a real contribution and difference to our community.

For more information on each of the categories, please read the guidelines available to download below.  A copy of the Nomination Form can also be downloaded below.  Nominations must be submitted by close of business on 9 December 2022, and can be emailed, posted or dropped off to the Council Offices.  For more information or any questions, please contact Customer Service/Community Liaison Officer, Elizabeth Hadley on 03 6352 6500. 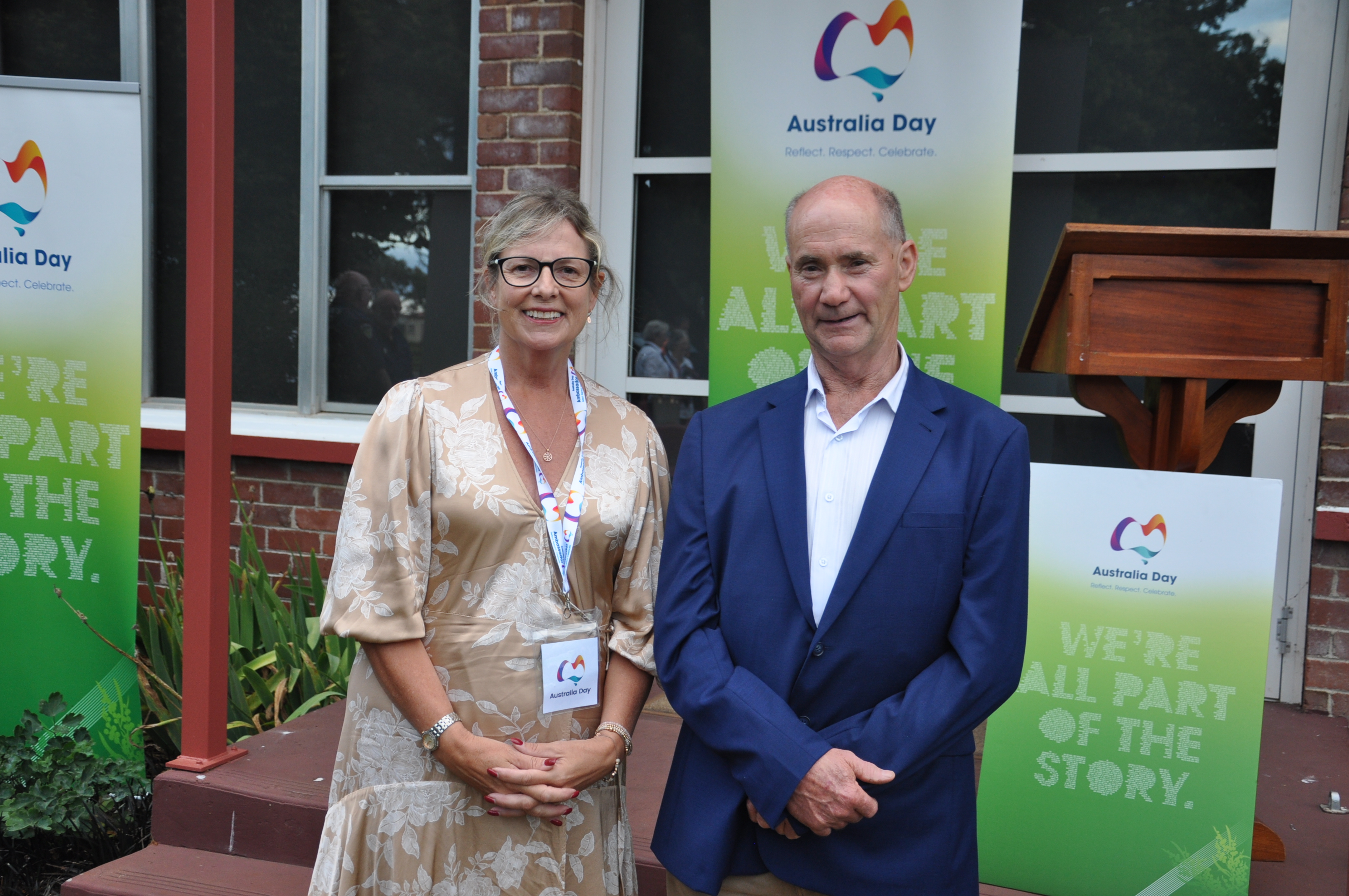 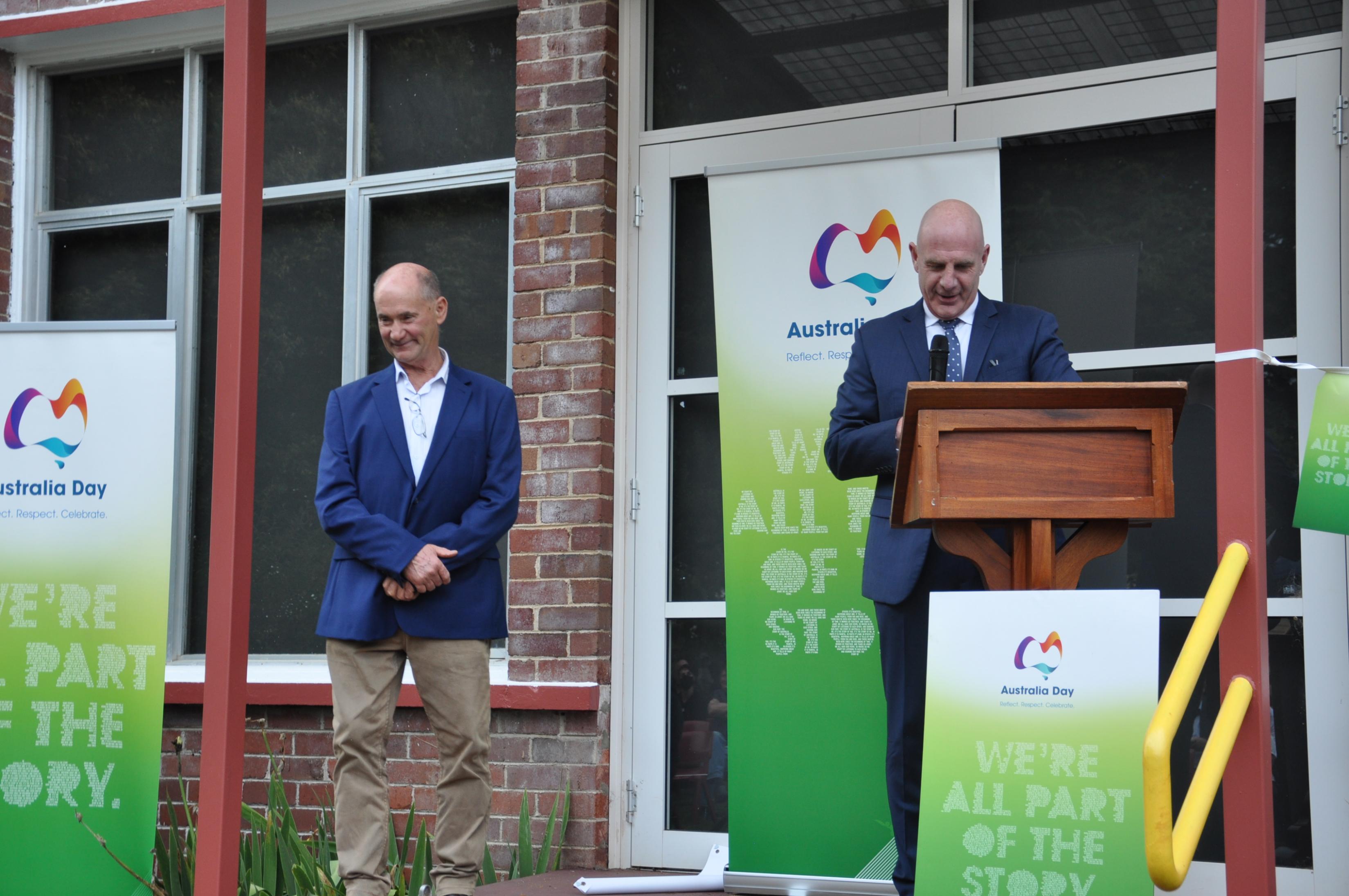 2022 Citizen of the Year | Rodney Martin 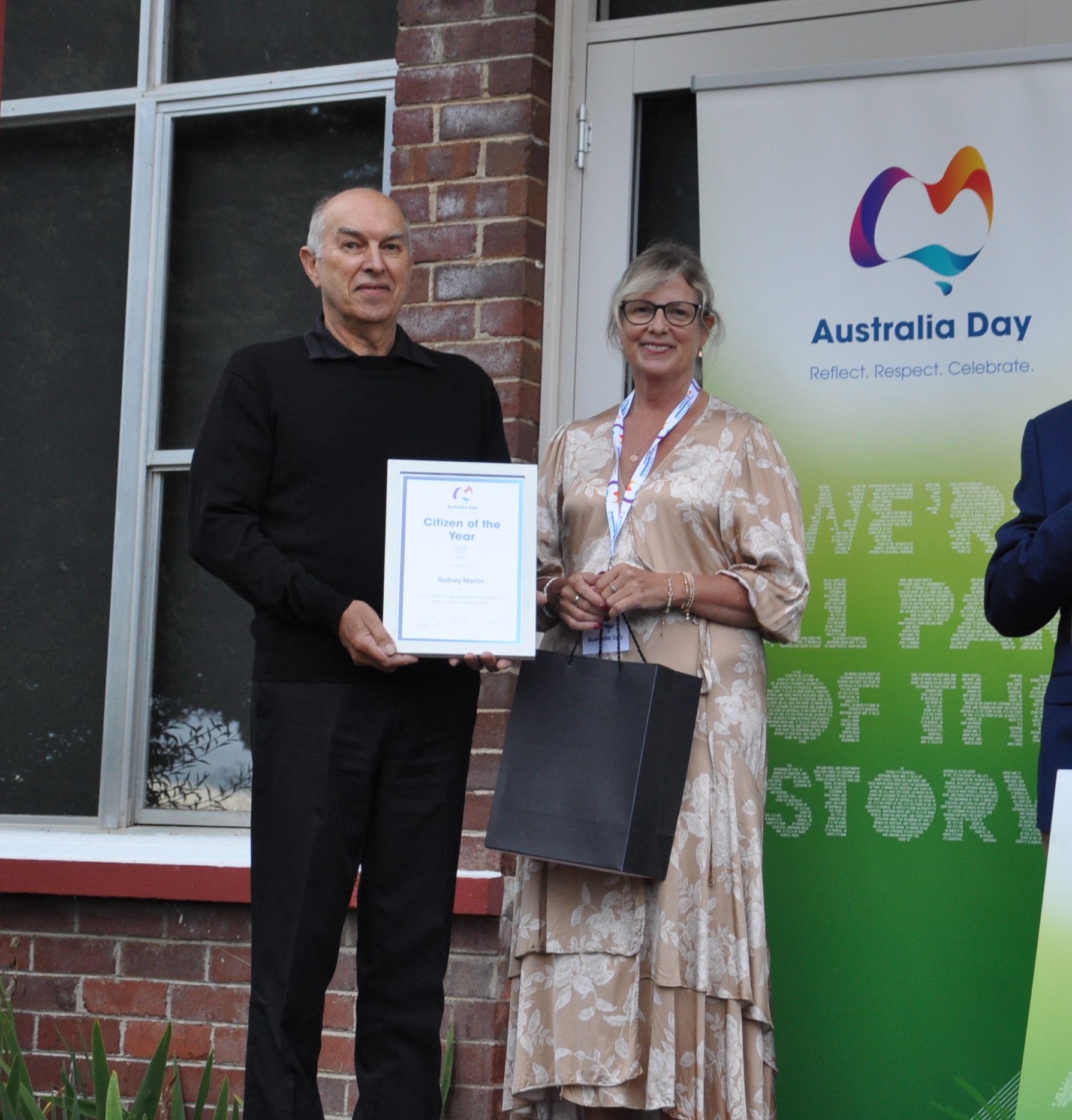 Rodney Martin has been a valued member of the Dorset Community for 65 years, and in that time has made an outstanding contribution to the well-being of the Community through leadership and personal service. Rodney has demonstrated excellence and commitment to his community through various different volunteer organisations.  He is currently the Road Crash Rescue Team Leader with the Dorset SES, and has been involved in rescuing and comforting people for the last 24 years that he has been a member of the SES.  Rodney is a current member of the Rotary Club for 9 years and during this time has held positions of President and Vice President. Rodney has organised numerous fundraising events for Rotary and volunteers many hours to the maintenance of public facilities including the NE Rail Trail and the Sidling Lookout. Rodney is a founding member of the Dorset Tasmanian History Society and currently holds the position of secretary/treasurer. Rodney’s passion for Dorset’s history and want to assist others in learning about local history and their family demonstrates his support for the Dorset community, both in the past and the future.  Rodney has been, and continues to be a positive role model to his fellow citizens through the dedication and commitment he shows in all that he does. He continues to serve his community on a daily basis asking for no thanks or recognition. He does this purely to enrich the citizens and visitors to Dorset’s lives and experiences. As mentioned by a referee “Rod is a quiet, achieving, long-time community volunteer through Rotary and the SES group and is a worthy recipient of this award”. 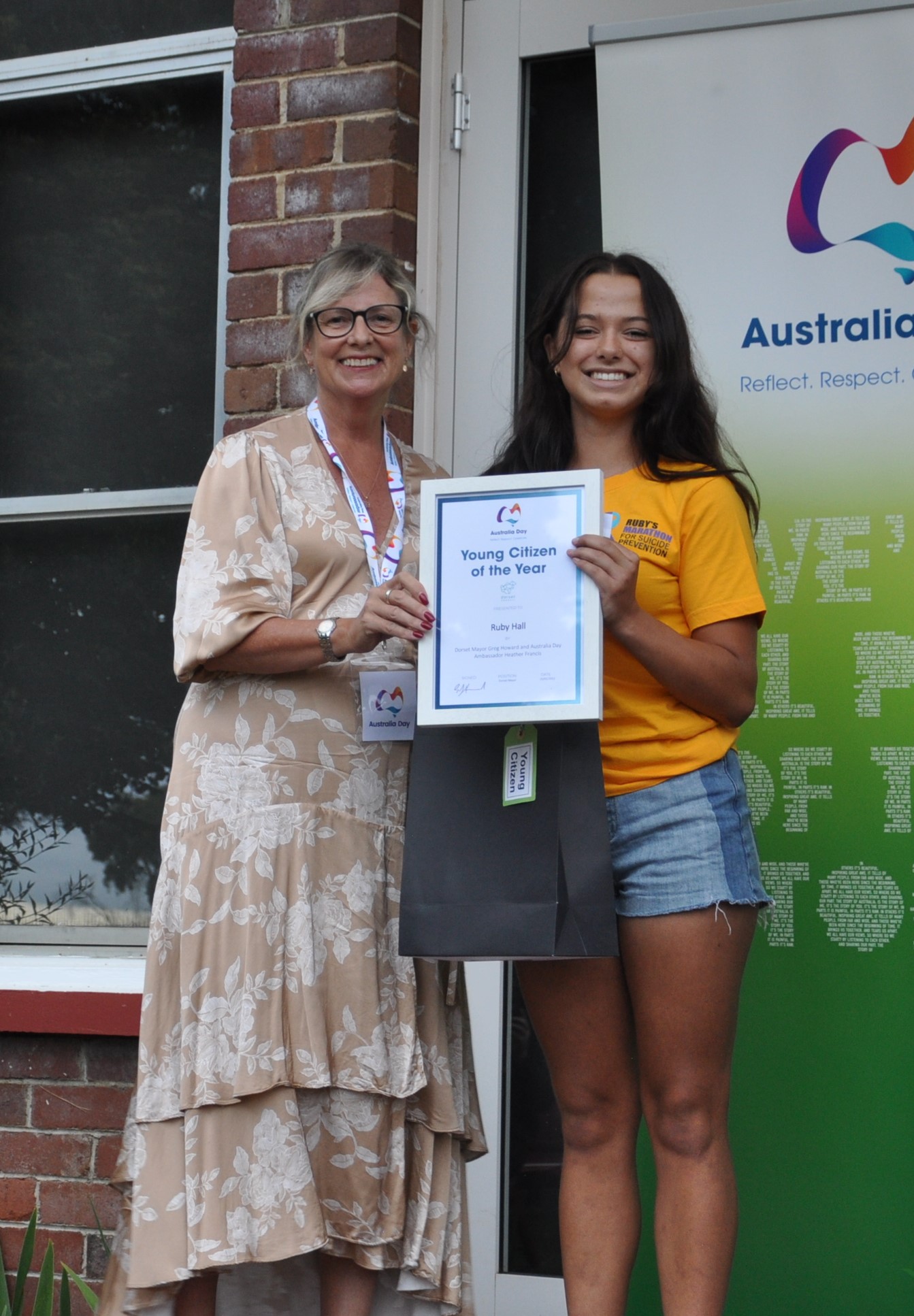 The selection criteria for the Dorset Young Citizen of the Year include having positive and inspiring personal attributes showing qualities such as versatility, flexibility and perseverance in service to the community, and for personal effort and initiative to have made a significant difference to the quality of life of the community.  For 15 year old Ruby, she has already made an outstanding contribution to the well-being of the Dorset Community through her personal service and specifically in the coordination, promotion and delivery of Ruby’s Marathon for Suicide Prevention which was an event that was held in 2021 and it showed Ruby’s mental strength and determination whilst completing her marathon. Whilst the marathon alone was worthy of Ruby’s nomination, it is not her only contribution to our community. Ruby has made significant contributions to the Scottsdale Football Club on field and through service, mentoring players and playing an active role in ensuring the wellbeing of her team mates is cared for and on field performances which resulted in Ruby being awarded the NTJFA Best and Fairest award for the under 14’s.  As mentioned by a referee “There is great admiration for Ruby as a young person demonstrating the initiative and perseverance required to plan for and hold an event that brought the community members of all ages together”.  Ruby is humble in her achievements, strives for continued personal improvement and is genuine in her care and concern for others and an inspiration to many around her.   Congratulations Ruby.

2022 Volunteer of the Year | Joanne Kerr

Joanne is, and has been, an active volunteer in our community for many years and is a very kind hearted and caring community member.  Joanne freely gives up her time and with over 20 years of volunteering at the Dorset Community House she continues to give up her time, energy, ideas and commitment to the House in multiple ways including being a volunteer transport driver, emergency food relief distribution, organising of functions and events.  Joanne is quite often seen helping various charities and organisations with cooking, selling raffle tickets, organising fundraisers for anyone in need. There aren’t many community groups that Joanne hasn’t assisted or been involved with over the years, and more recently these include the Scottsdale Senior Citizens and the Lietinna Hall Committee.  Amongst all of Joanne’s volunteering that she does, she still finds time to dedicate to her family and is very active in the lives of her children and grandchildren.  As mentioned by referee’s, “You could not find a person more dedicated to her community than Jo – her heart is Dorset” and “We are just so lucky to have Jo in our Community”.  Being recognised for your voluntary efforts in our community is a real achievement. 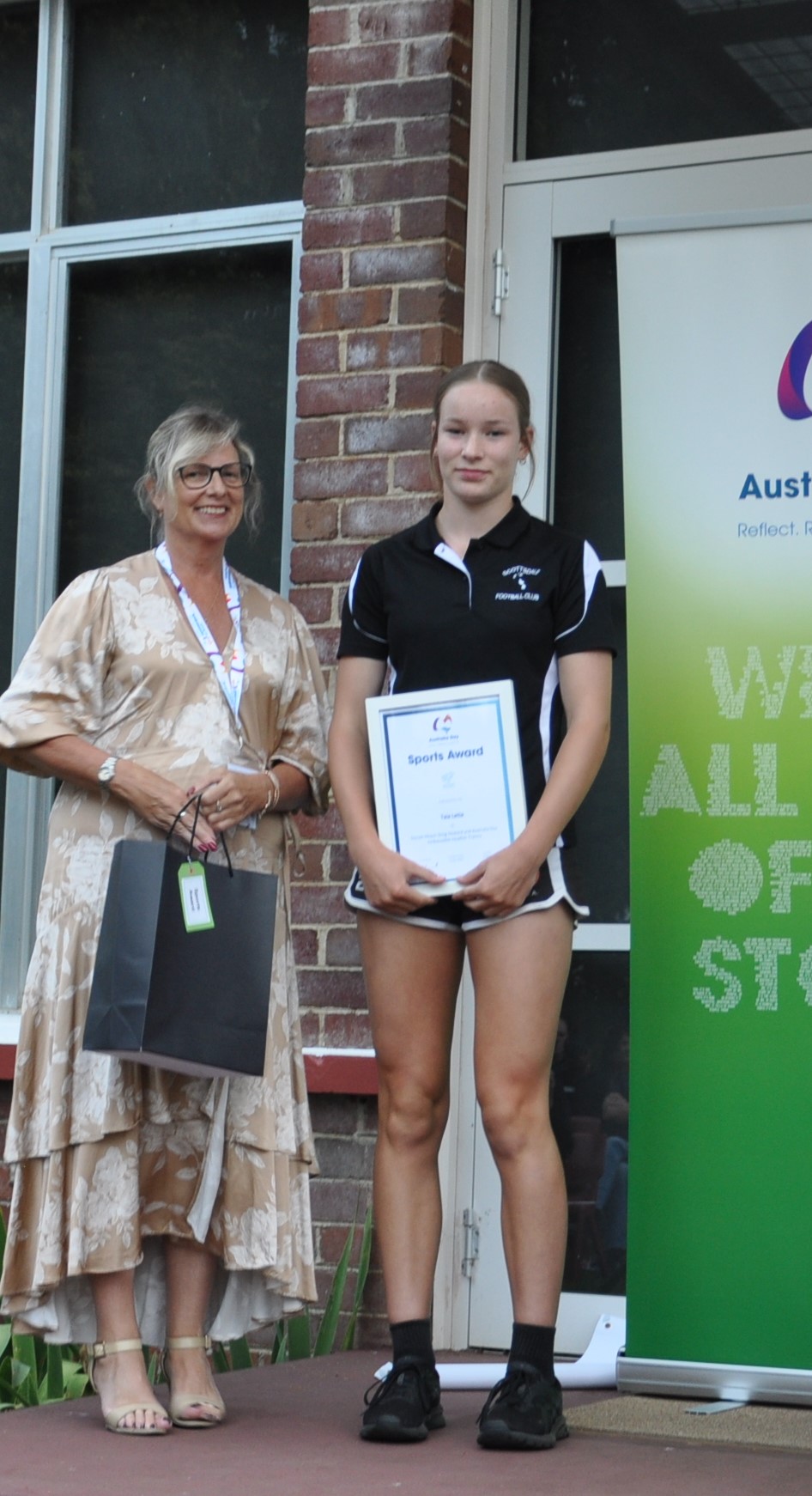 As mentioned by the nominee “Taia has made exceptional athletic contributions, is humble in her achievements, is resilient and committed to continually developing herself”   Congratulations Taia on receiving this well-deserved award. 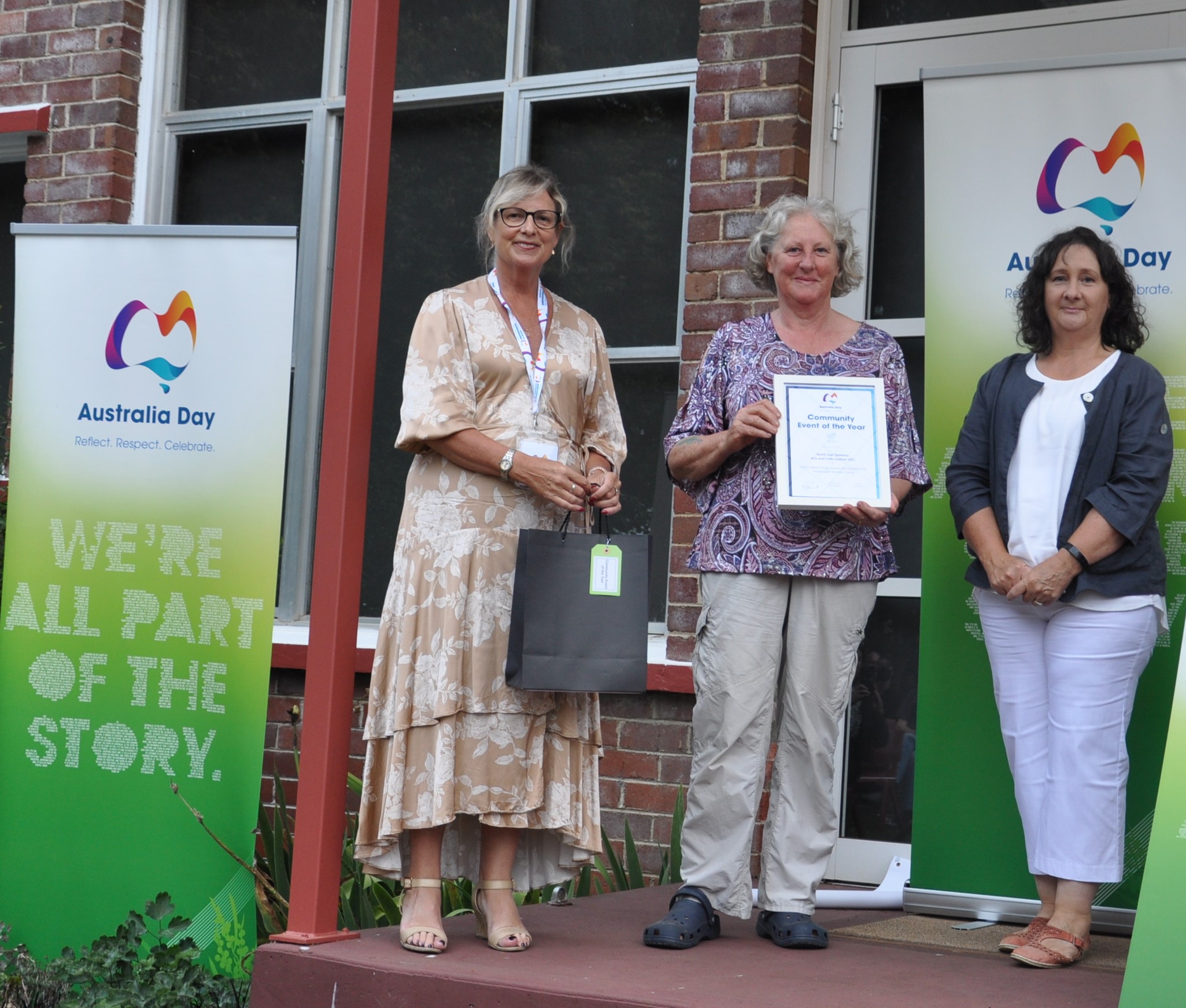 After 46 years of the Arts and Craft Festival being an annual event in Scottsdale, the organising committee at the time were finding it too hard to resume after the previous year’s cancellation due to COVID so the committee of the Mechanics Hall stepped in to ensure the event continued.  The Mechanics Hall hosted the festival for the first 30 years of its existence and they were keen to bring it back to its original place, and decided to run the show with a theme of “coming home”.   With little time to pull this all together, the committee and volunteers worked tirelessly in only a few short weeks to make it the successful event that it was with over 700 patrons attending in the 3 days. Congratulations to the organisers from the Mechanics Hall – James Scott Decorative Arts Society for making this event such a success.

All nominees for Australia Day Awards are considered for a Certificate of Appreciation. Certificates of Appreciation celebrate the rich diversity of our vibrant community. They are awarded to recognise individuals and groups who continuously strive to make our community a better place for those who live, work and visit our special part of the world.

In 2022, the Australia Day Certificates of Appreciation were awarded to the following recipients (pictured with Australia Day Ambassador Heather Francis):

The Dorset Suicide Prevention Network is truly community led.  The group is supported by service providers and raises awareness around the contributing factors that can lead to suicide, enable people to be confident in taking action where needed and build a well informed and connected community.  Each year, the group run a quiz night in Scottsdale during Mental Health Week.  It is a fundraiser to drive the activities of the network but more importantly, the night helps raise awareness of suicide prevention. 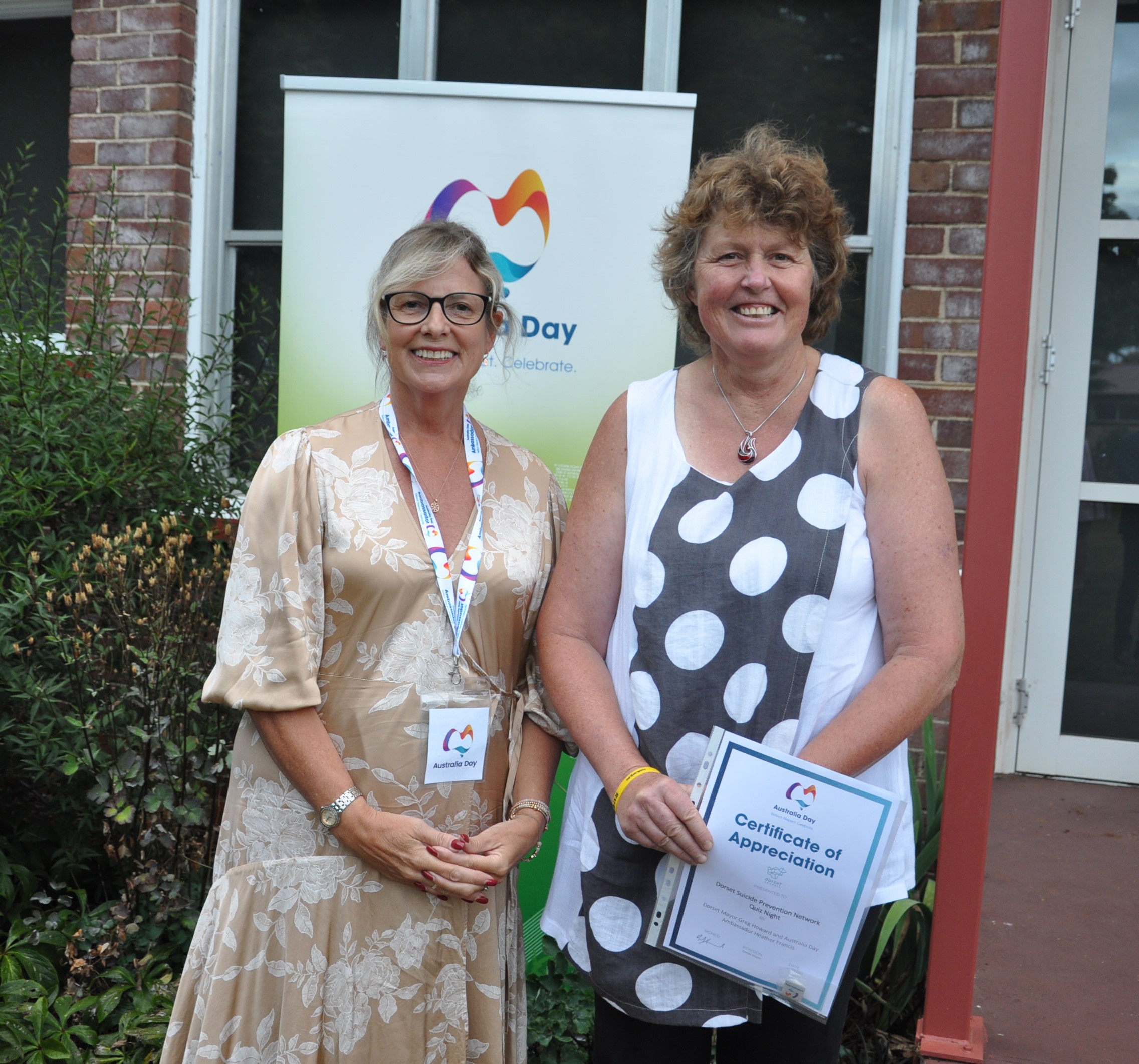 Tara Lette has made significant achievements in a number of sports and demonstrates excellent sportsmanship.  Tara’s athletic performance and her sportsmanship with her involvement with North East Little Athletics and the Scottsdale Football Club, where she demonstrates athletic ability and makes contributions to the Club more broadly including volunteering, encouraging others (including younger athletes) and providing leadership and mentoring. 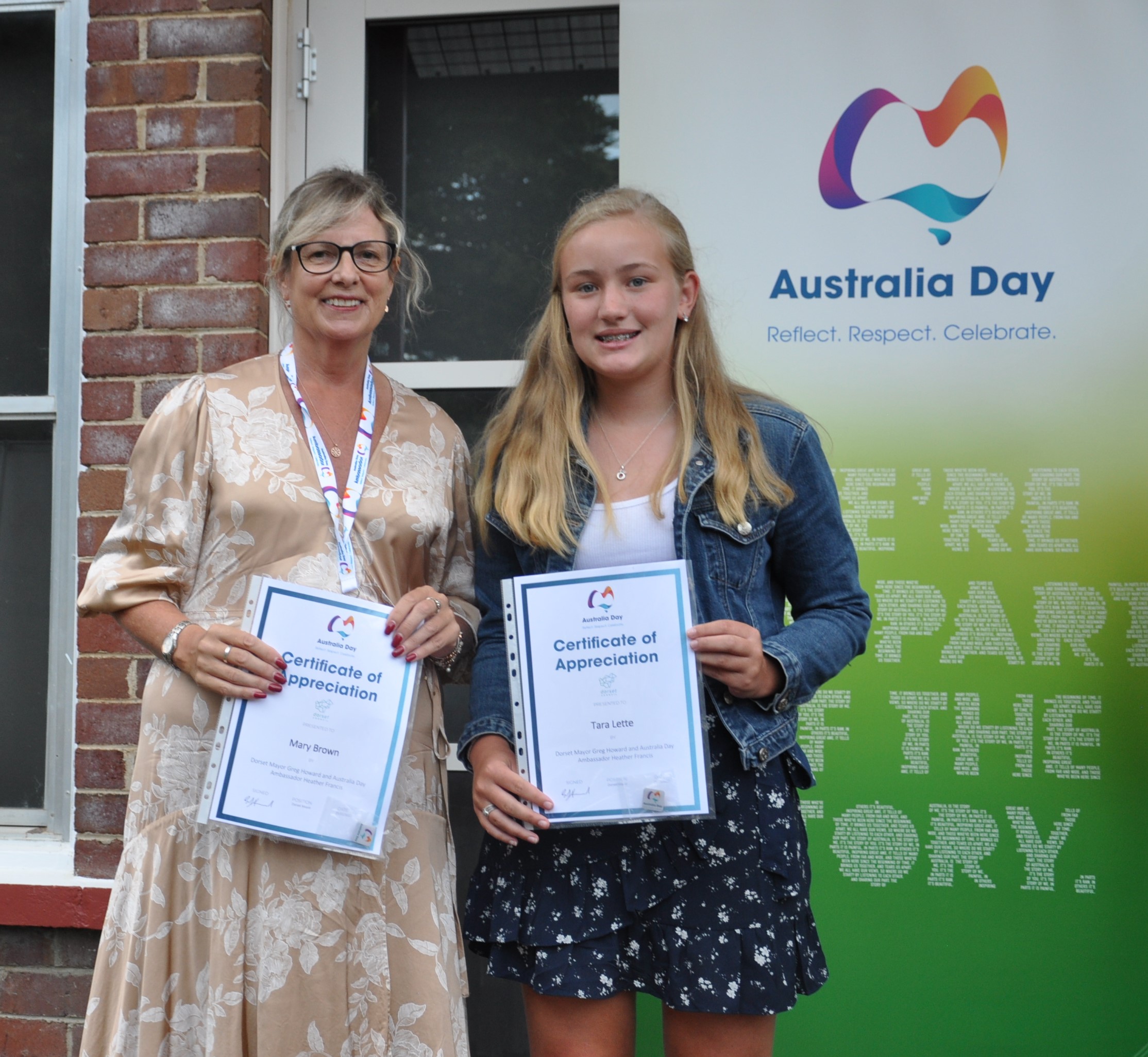 The Under 17 Girls Scottsdale Magpies Junior Football Team won the Division 2 Grand Final in the NTJFA competition in 2021.  For many of the players, it was their first year playing football.  From the start of the season, it was in doubt that they would even make finals and to win the Final by 1 point was an outstanding result. 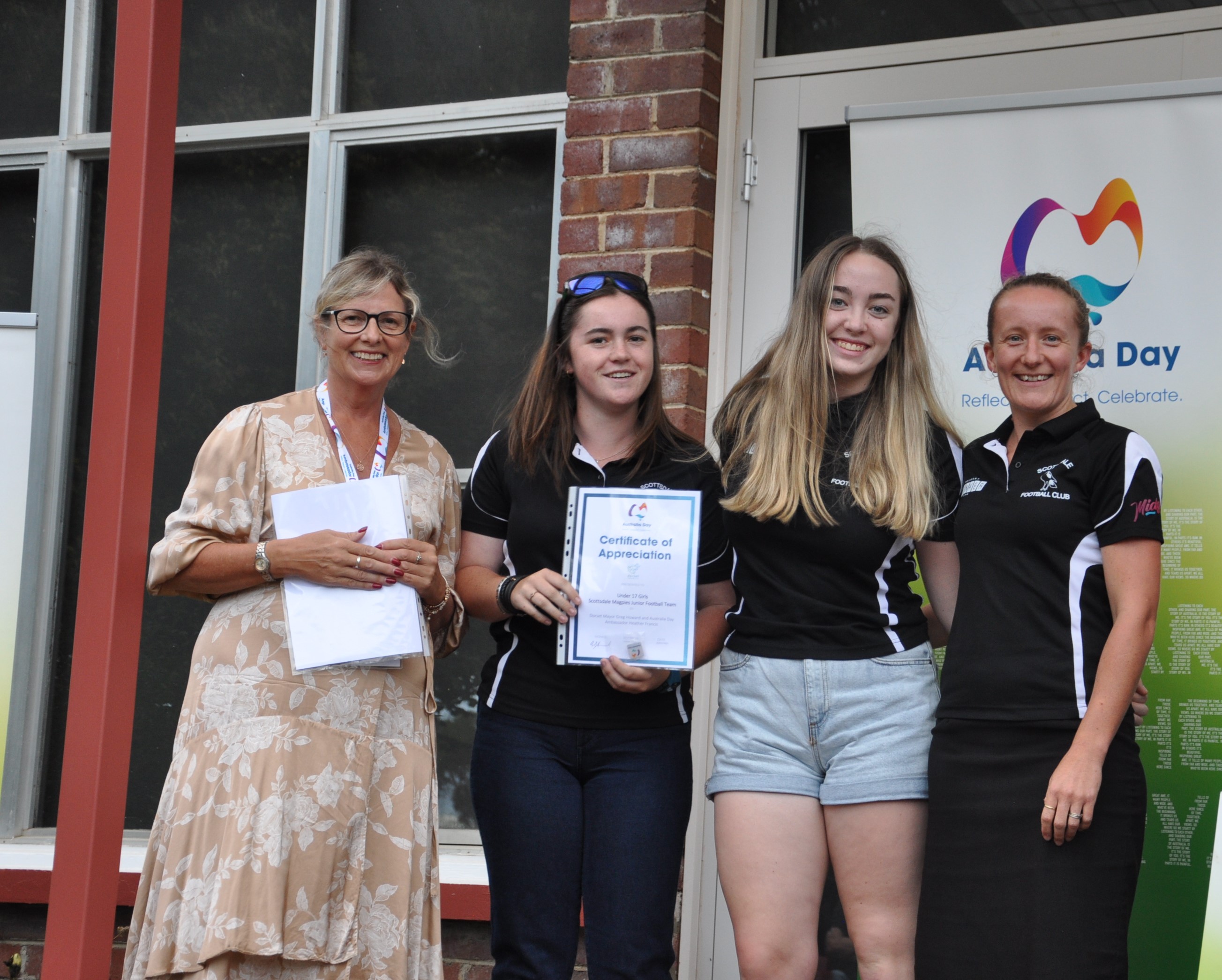 Mary Brown joined the Legerwood Catering Group Inc. as a volunteer wanting to give to the Dorset community.  Mary has provided strong support to older members of this group, sharing in catering roles and fundraising activities.  Mary uses her initiative and actively participates in planning and follow through for activities the Group plan.  The Group actively fundraise to enable support of community projects, community members and sustain the use of small halls such as the wonderful facility found in the Legerwood Memorial Hall. 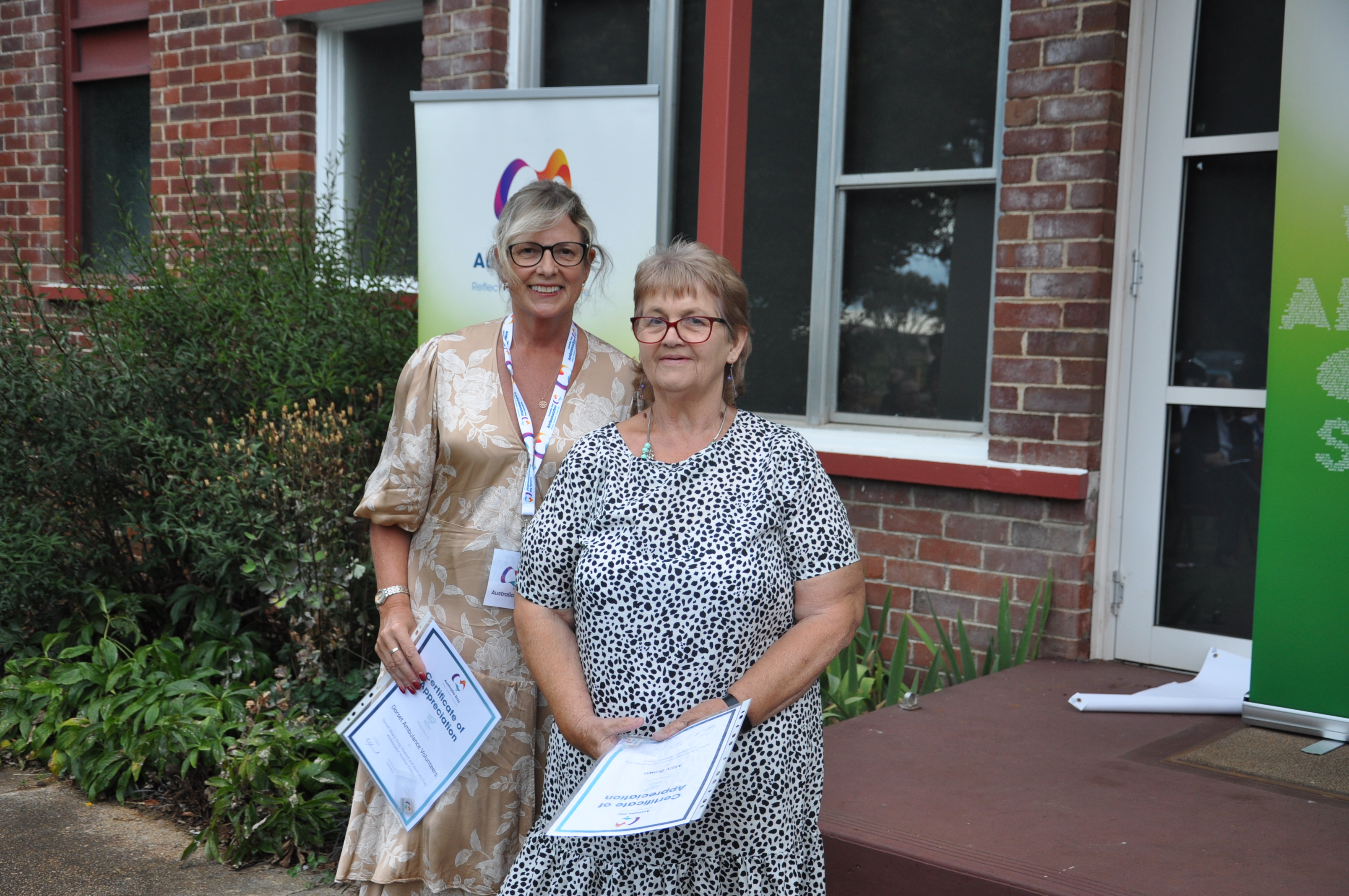 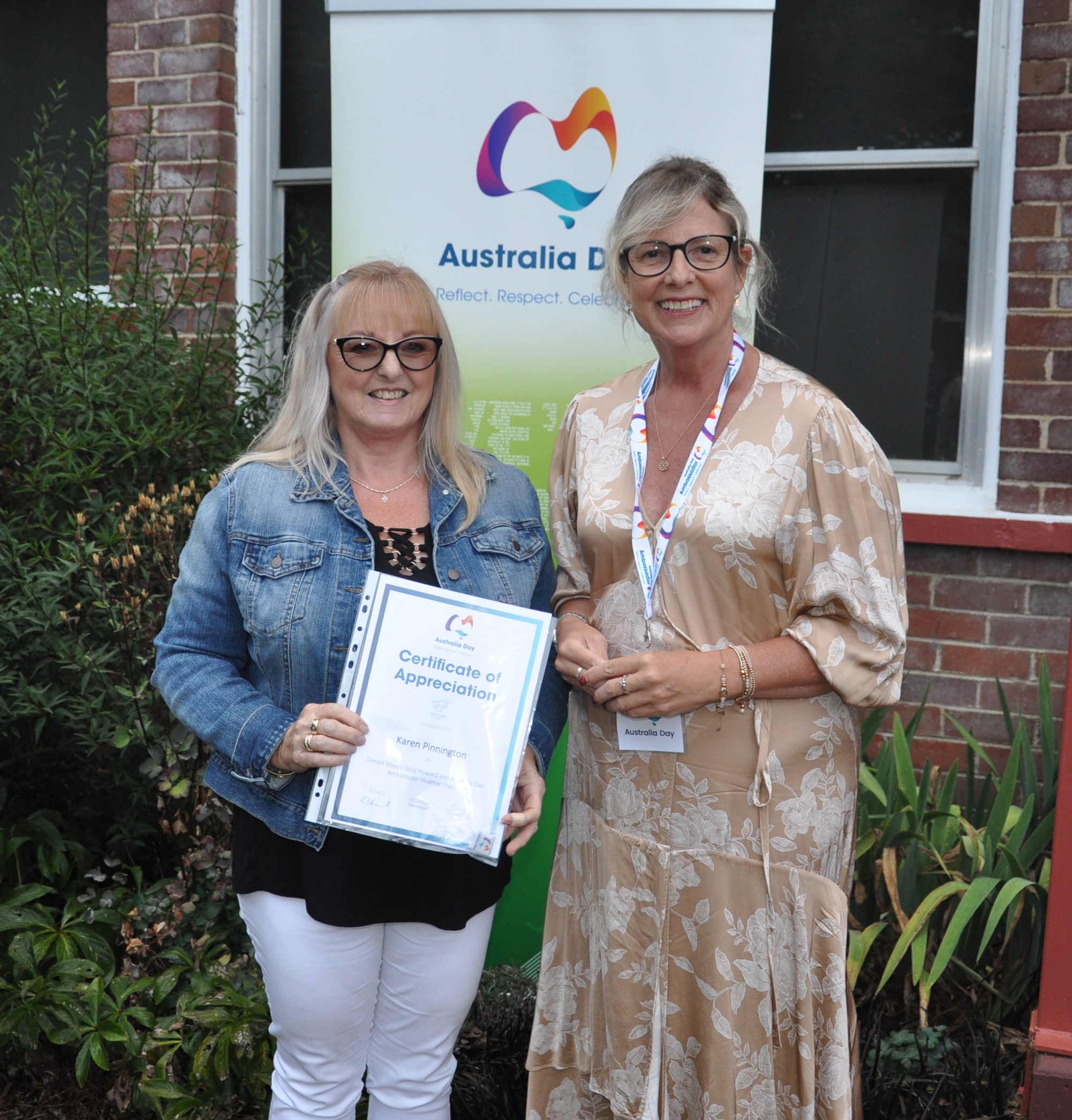 Libby Richardson was responsible for initiating the Dorset Community Seed Library that started approximately 2 years ago, and is now widely used and appreciated by gardeners, families and interested community member of Dorset.  The Seed Library is located at the Dorset Community House, with Libby as the lynchpin – spending many hours sorting, dividing and labelling many varieties of seeds for the benefit of the community – all available free of charge to the community. (Libby wasn't able to make the awards presentation evening)

Zoe Bennett is a young person who has lived in Dorset from a young age and now contributes her time, passion and energy to supporting other young people in the Dorset area.  Zoe is a caring, compassionate and committed member of the Dorset community who shows dedication in all she puts her hand to.  Zoe goes out of her way to support other younger members of the community and is a youth leader for a youth group hosted by the Door of Hope Church in Launceston – open to supporting the many young people from Dorset who attend college and university in Launceston. 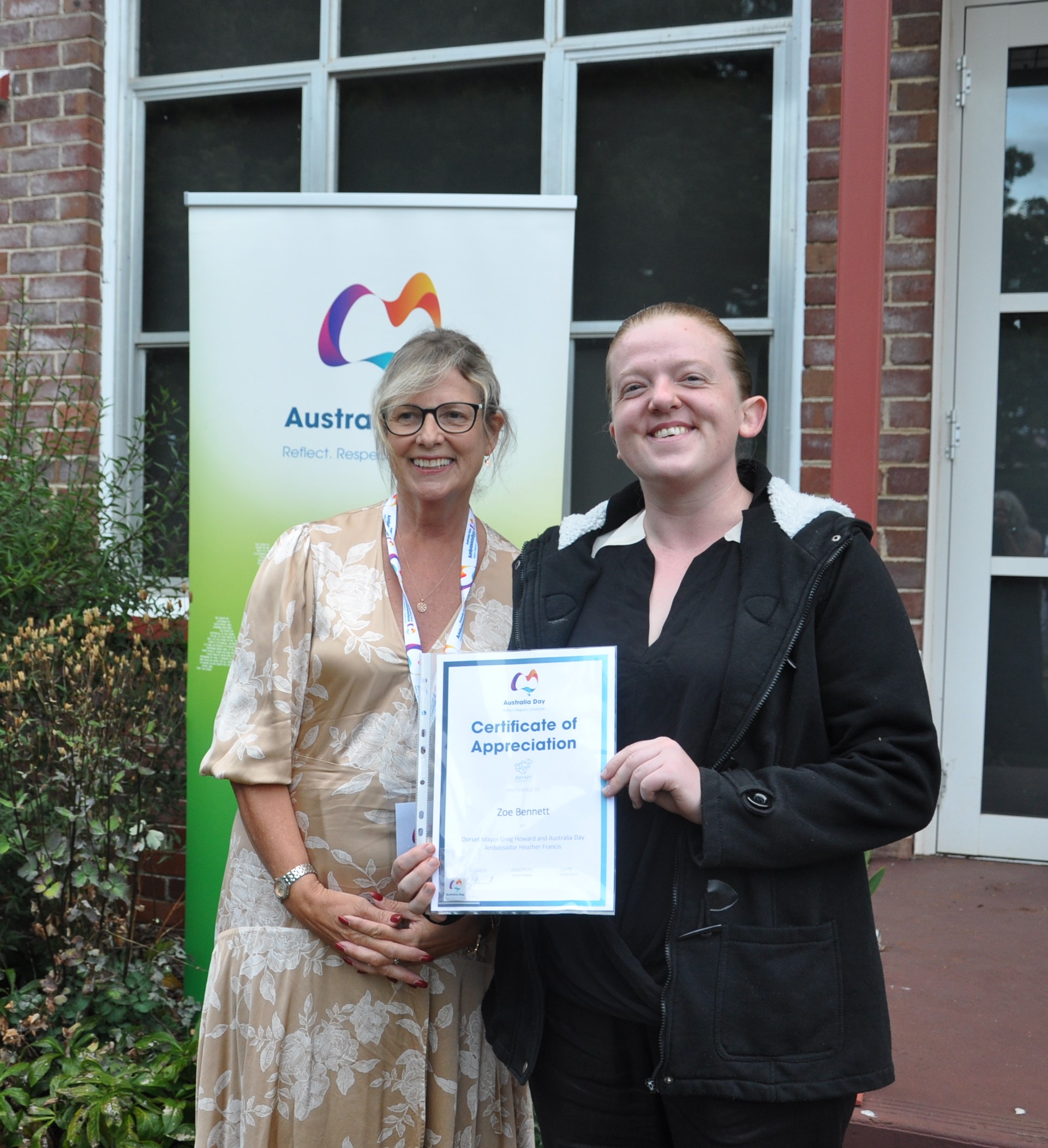 The Dorset Ambulance Volunteers contribute many days of support every week to allow the service to continue running safely in Dorset.  The ambulance service provides emergency medical support to the whole area and are usually the first responders and deal with the most extreme medical situations and needs.  The service provides essential health support, however, many people in the community and even patients do not realise that there is only one paid worker on at a time for the service and the other support comes from these well trained and committed volunteers. Community
keep up to date subscribe to the Council e-newsletter for all the latest news and updates from the region!